A solo exhibition of ink works on paper 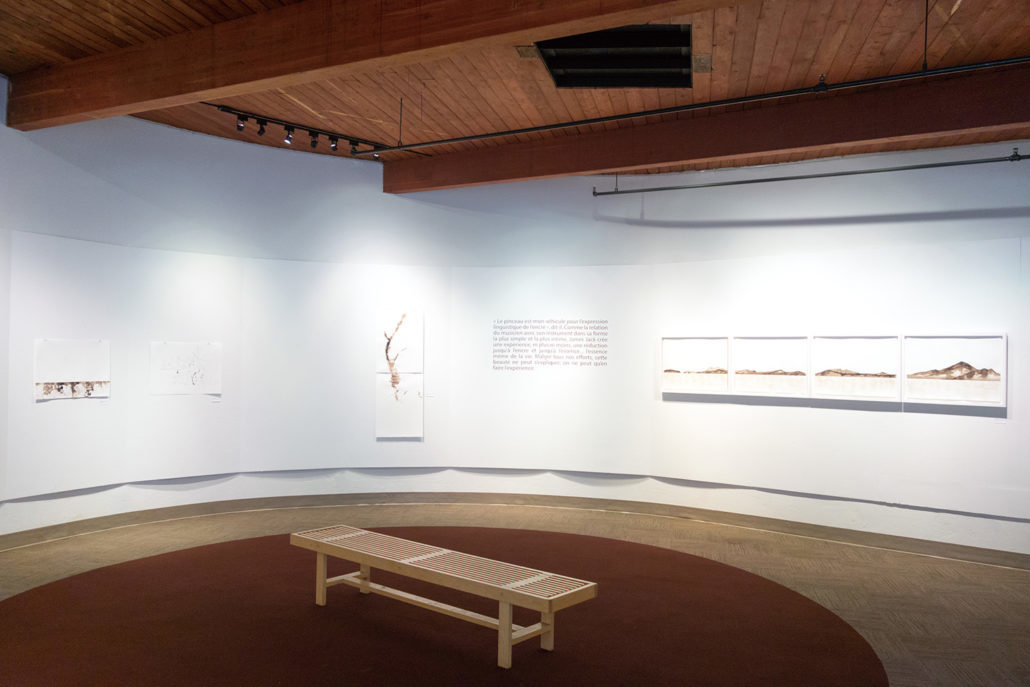 The poetry of James Jack

When I met James in 1997, little did I know that a story of artist and gallerist was in the making. Our paths have run in different directions, but we have maintained a rich connection in life. Fast forward twenty years and here I am now, trying to put together a portrait.

Through my research, I have found parts of the story of James Jack. The following is not complete, but it is an impression of the artist as it floats in my mind’s eye. I hope it will serve as a relevant introduction of James to the Orford Music audience.

What drew me in initially is his great sense of balance in his first solo exhibition in New York City, titled Ink and Essence. In this show, his exploration of space through the subtle use of simple forms created timeless contemporary pieces. James Jack transcends the conventions of Eastern tradition and Western modernity. Using the medium of monochromatic ink painting, his work is aesthetically defined by subtlety and restraint – poetry with a brush.

Jack is steeped in the Japanese language, Eastern philosophy and meditation. He spent years learning shodo, the art of Japanese calligraphy, and copied the etymology of all the Chinese characters used in modern Japanese language. This formed the basis for his brushwork, following the Eastern painting tradition of the well-rounded artist as also accomplished calligrapher.

“The brush is my vehicle for the ink’s linguistic expression”, he states. Like a musician’s relationship with his instrument in the simplest most intimate form, Jack creates an experience, nothing more, nothing less; a reduction to ink and essence, the very essence of life. Try as we might, this beauty cannot be explained; it can only be experienced. 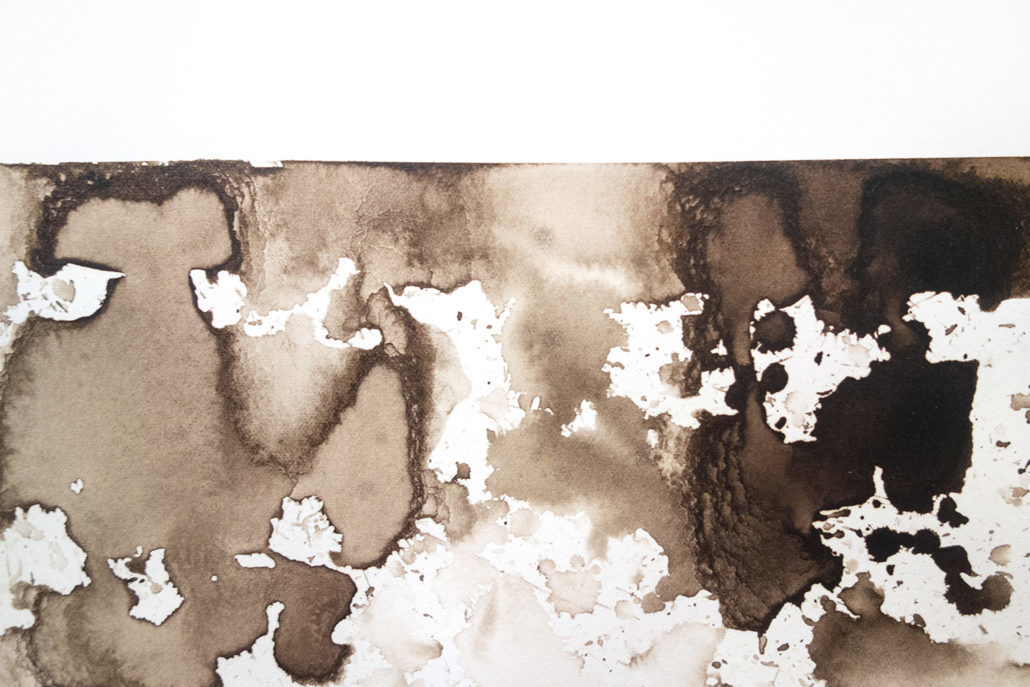 However his work is not limited to ink paintings. In 2005, the Portland Art Center presented his first site-specific solo exhibition titled Natura Naturans, an ephemeral installation of natural pigments spread on the floor of the gallery. Borrowing natural stone pigments from a cliff where he had just completed an artist residency on the Pacific coast, Jack drew a circle based purely on elements from nature, precisely arranging them with nothing more than a mortar, pestle and a tea strainer. The artist now continues to explore humans’ relationship with the environment and its universal awe.

Jack is such a traveler who searches with all of his being and intuition to bring together a vocabulary that brings together the real with the spiritual. Gathering materials from specific sites, Jack explores social memories of place through intimate contact with the people who live there in the simplest way. His method, using ink he creates from the husk of butternuts and walnuts (he gathers the nut, separates the husks, grinds, boils and filters them) is a meditative, labor intensive process. Representation is not the goal. The painting is more than the subject. The ink, color and brushwork become the image, not the mountain or ocean or whatever he is painting. Poetry that is connected to the landscape and people.

Since 2005, Jack has been collecting soil from various places as part of his interest in exploring the materiality of landscapes, the symbolic meanings of earth elements and the potential of organic materials as painting material. This process culminated in his Philosophies of Dirt series featuring natural pigments from 46 sites which the artist has touched the earth. This work has continued in ephemeral installations and works on paper. Most recently in 2017, with Natura Naturata: Light of Singapore, he continued this exploration for a site-specific commissioned work composed of more than twenty soil samples from locations in Western Singapore.

In the Transpacific Crossing series Jack began in 2015, he explores the pathway of one container ship as it crosses the Pacific Ocean between Japan and North America. These paintings show the view of the Pacific through the bathymetric data as well as the memory of water when applied to the paper recalled by the ink. Again using handmade ink, he re-imagines the journey via these underwater seascapes, diving deep into the memories of the water, paying special attention to the white space around and inside of the work. Each painting represents a day on the ship through which we can imagine the slow journey between East and West via the Ocean.

Art offers possibilities that feed the soul. It is in the resulting union between nature and art that we are given a new perspective, stories of resilience and repurpose that give us clues on how to live the social and environmental challenges of today. As an artist in residence at Orford Musique’s Japan Festival this summer I have high expectations for the potential for what can be found in their shared creative passion. 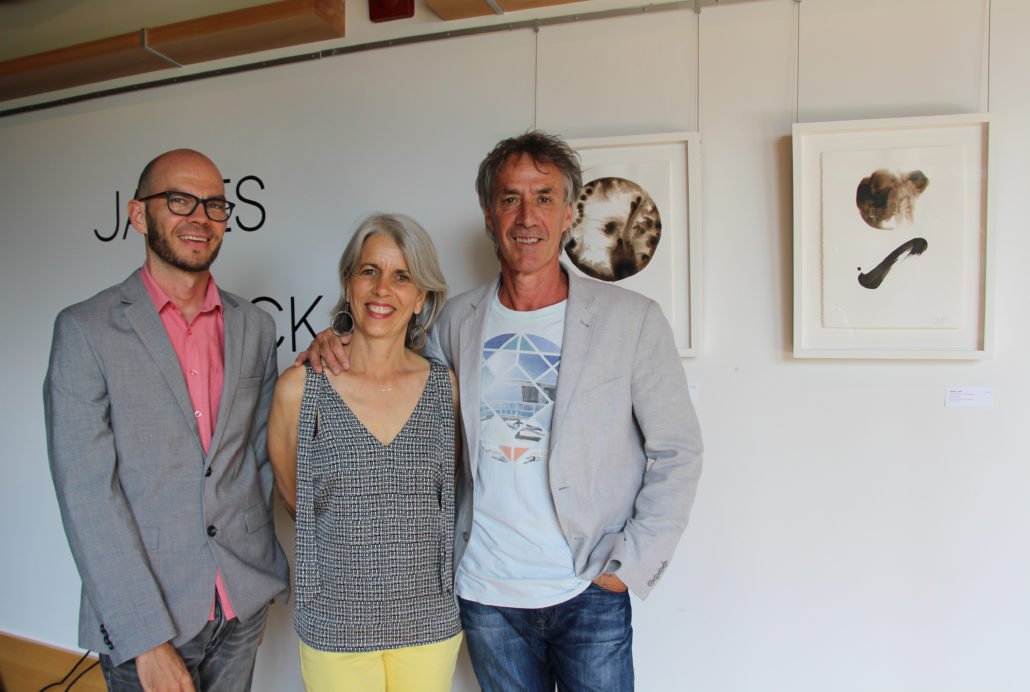 “Dialogica” video installation at Museum of the Sky, Nagano

James Jack on Searching for Rumours, Reimagining The Framework and Mapping Alternative...
Scroll to top